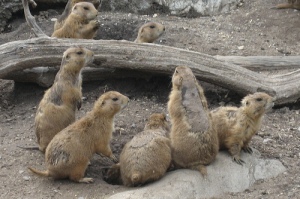 There’s a debate in our culture about what really makes us happy, which is summarized by, on the one hand, the book “On the Road” and, on the other, the movie “It’s a Wonderful Life.” The former celebrates the life of freedom and adventure. The latter celebrates roots and connections. Research over the past thirty years makes it clear that what the inner mind really wants is connection. “It’s a Wonderful Life” was right. Joining a group that meets just once a month produces the same increase in happiness as doubling your income. According to research by Daniel Kahneman, Alan B. Krueger, and others, the daily activities most closely associated with happiness are social—having sex, socializing after work, and having dinner with friends. Many of the professions that correlate most closely with happiness are also social—a corporate manager, a hairdresser…

[Quoting a fictional scientist in the story…] ‘I’ve come to think that flourishing consists of putting yourself in situations in which you lose self-consciousness and become fused with other people, experiences, or tasks. It happens sometimes when you are lost in a hard challenge, or when an artist or a craftsman becomes one with the brush or the tool. It happens sometimes while you’re playing sports, or listening to music or lost in a story, or to some people when they feel enveloped by God’s love. And it happens most when we connect with other people. I’ve come to think that happiness isn’t really produced by conscious accomplishments. Happiness is a measure of how thickly the unconscious parts of our minds are intertwined with other people and with activities. Happiness is determined by how much information and affection flows through us covertly every day and year.’

See Guardian article “What’s the big idea?: David Brooks’s theories on society were fashionable 200 years ago, he tells Stuart Jeffries. So why are British politicians such fans of his new book?”

See also David Brooks’ Op-Ed in today’s NYT “Amy Chua is a Wimp” (January 18, 2011) where he chides Chua, the Chinese mother driving her children relentlessly to succeed, for being too soft on her children, by neglecting the arduous task of developing critical social skills in her kids.

Practicing a piece of music for four hours requires focused attention, but it is nowhere near as cognitively demanding as a sleepover with 14-year-old girls. Managing status rivalries, negotiating group dynamics, understanding social norms, navigating the distinction between self and group — these and other social tests impose cognitive demands that blow away any intense tutoring session or a class at Yale.

Yet mastering these arduous skills is at the very essence of achievement. Most people work in groups. We do this because groups are much more efficient at solving problems than individuals (swimmers are often motivated to have their best times as part of relay teams, not in individual events). Moreover, the performance of a group does not correlate well with the average I.Q. of the group or even with the I.Q.’s of the smartest members.

Researchers at the Massachusetts Institute of Technology and Carnegie Mellon have found that groups have a high collective intelligence when members of a group are good at reading each others’ emotions — when they take turns speaking, when the inputs from each member are managed fluidly, when they detect each others’ inclinations and strengths.

Participating in a well-functioning group is really hard. It requires the ability to trust people outside your kinship circle, read intonations and moods, understand how the psychological pieces each person brings to the room can and cannot fit together….

Does activism make you happy? 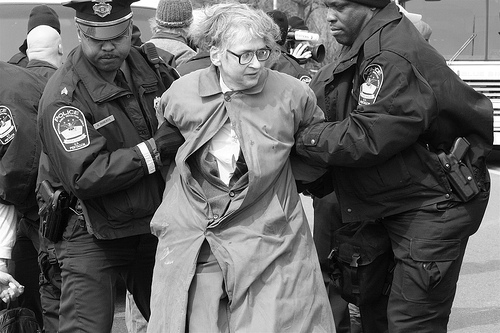 The article reports on a forthcoming study “Some Benefits of Being an Activist” by Tim Kasser and Malte Klar that activism is associated with happiness (2009, Political Psychology 30(5) ).

The Globe article neglected to quote me that there are lots of reason to support activism — it may increase people’s confidence in making a difference, it may improve governmental quality and leaders’ accountability, it may spark extra-governmental change or reveal the immorality of laws (as seen in the Civil Rights Era).

That said, I am skeptical, as the Globe article noted that it is activism per se that is causing happiness, based on our forthcoming religious research.  Religious Americans are more happy, but it has nothing to do with their theology, or what they hear from the pulpit, or a sense of calling.  It is explained by being in a morally-infused social network.  Praying alone or attending a church where you hear the sermons (but don’t make friends) makes you no happier.  Similarly if one looks at research by Alan Krueger and others, it is social activities that bring happiness.

So while I’m not sure that bowlers are doing as much for government accountability as protesters, my guess would be that they are equally happy.

Since January 2008, Gallup has surveyed 1000 people a day to gauge their levels of wellbeing. [Confession: We were asked to recommend social capital questions that should be included on this survey.] Gallup plans to continue the surveying indefinitely into the future.

Gallup’s first report came out and was picked up by the press. TIME calls it the *Dow Jones Index of Happiness*. The data is probably going to be less useful on a daily basis: i.e., *happiness off today in late-day profit-taking …* and more useful after months or years of this data has been gathered together.

This aggregated dataset could be used to construct county-level happiness estimates for most counties in the U.S. And then these aggregate happiness measures could be attached to other datasets to see how much individuals’ happiness is affected by those around them. For example, are the same individuals (controlling for education, ethnicity, years lived in the community, income, marital status, etc.), happier or not if they are surrounded by others who are happy. One could imagine that subjective wellbeing is contagious or conversely that if one is a lone misanthrope in a sea of happy neighbors that it heightens one’s depression (in the same way as New Year’s Day is a grim holiday for those who are not happy).

One could also use this aggregated dataset to determine how individuals’ levels of happiness relate to various activities (social activity, political activity, religion, sports participation, etc.).

Along the latter topic, Alan Krueger (a terrific economist at Princeton) and others have some of the most interesting new recent work on happiness. He used the American Time Use Survey methodology and privately gathered through the Princeton Affect and Time Survey (PATS). The individuals whose activities were being recorded through PATS had Palm-like devices and were randomly pinged on different days and at different times of the day and had to report their levels of happiness, what activity they were doing, and who they were doing it with. [I’m glad it wasn’t a picture-phone!] What was unique about Krueger’s data and approach is that he could compare levels of happiness for the same individual across the week. So some people (the Zen Masters or Buddhists) might be pretty happy doing everything from dish-washing to summiting Everest, whereas others are relatively unhappy even if their dream spouse has just said yes to their marriage proposal. The Time Use data enabled Krueger to measure the happiness of individuals relative to each individual’s baseline level of happiness and thus see which activities brought more happiness or less. And the most pleasurable activities (that I can write about) were….

and Sports and Exercise.

[Note: they chart happiness by looking at the percent of the time that happiness feelings in the activity exceeded stress, pain and sadness). On this score religion was highest with 92% of the experiences being pleasurable; pleasure is the inverse of the U-index they report where religion is low with 8% of experiences.]

The full study is called “National Time Accounting: The Currency of Life” and is written with Nobel Laureate Daniel Kahneman (also of Princeton), David Schkade (UCSD), Norbert Schwarz (U. Michigan), and Arthur Stone (Stony Brook U.). For the results on religion, see especially Tables 5.2.b and 8.3 at the end of the National Time Accounting piece.

Give me liberty or give me terrorists

Wessel cites famed Princeton economist Alan Krueger that lack of civil liberties (much to many’s surprise)  is a better predictor of terrorist involvement than poverty.

“As a group, terrorists are better educated and from wealthier families than the typical person in the same age group in the societies from which they originate,” Mr. Krueger said at the LSE in 2006 in research from his forthcoming book, “What Makes a Terrorist?”

Krueger notes that “There is no evidence of a general tendency for impoverished or uneducated people to be more likely to support terrorism or join terrorist organizations than their higher-income, better-educated countrymen”. And he observes that 9-11 perpetrators were relatively well-off men from a rich country, Saudi Arabia.

Wessel notes: “Among the statistical pieces of the puzzle a small band of academics have assembled since are these:

• Backgrounds of 148 Palestinian suicide bombers show they were less likely to come from families living in poverty and were more likely to have finished high school than the general population. Biographies of 129 Hezbollah shahids (martyrs) reveal they, too, are less likely to be from poor families than the Lebanese population from which they come. The same goes for available data about an Israeli terrorist organization, Gush Emunim, active in the 1980s.

“• Terrorism doesn’t increase in the Middle East when economic conditions worsen; indeed, there seems no link. One study finds the number of terrorist incidents is actually higher in countries that spend more on social-welfare programs. Slicing and dicing data finds no discernible pattern that countries that are poorer or more illiterate produce more terrorists. Examining 781 terrorist events classified by the U.S. State Department as “significant” reveals terrorists tend to come from countries distinguished by political oppression, not poverty or inequality.

“• Public-opinion polls from Jordan, Morocco, Pakistan and Turkey find people with more education are more likely to say suicide attacks against Westerners in Iraq are justified. Polls of Palestinians find no clear difference in support for terrorism as a means to achieve political ends between the most and least educated.”

The case is far from open-and-shut, but Krueger believes that providing civil liberties and political rights is a better way of fighting terrorism.  Mr. Krueger asserts: “When nonviolent means of protest are curtailed, malcontents appear to be more likely to turn to terrorist tactics.”

It may be cold comfort when countries that pride themselves on civil liberties (like the US and UK) are victims of terrorism, but it does suggest that curbing civil liberties under things like the Patriotism Act run the risk of making things worse, not better.