I wrote earlier about some insurers using social capital in making decisions of whom to insure.

That post and a story sent to me by Lew Feldstein about doctors prescribing outdoor time got me thinking about doctors and social capital.  In the same way as doctors ask questions of patients around smoking, exercise, diet, etc., why shouldn’t doctors also ask patients to fill out a short survey about social capital activities they engage in:  number of confidants, how many of their neighbors’ first names they know, how often they go to friends’ houses or entertain others in their home, etc.?

These data could be used for 3 purposes:

1) to track real changes in the patient over time:  e.g., if a patient used to report 2 confidants and now reports zero it would be a chance for the doctor to find out what had triggered this (a friend moving, serious arguments, a close friend dying, etc.) that might help identify patients at risk of being socially isolated or going through stressful times.

2) to benchmark against others of the patients’ education, race and age.  In larger practices, or if this information was aggregated anonymously by affiliated hospitals, the computer could help patients understand the degree to which they far less involved in community or other associations or less trusting than comparable others nationwide or in their area.  If one was significantly below what others were, the doctor might want to bring this to the patient’s attention:  “did you know that most others like you are far more active in their community?”  or “did you know that most others like you volunteer much more their community?”  “This is something that has clear health impacts;  would you like more information about how to get more involved?”

3) to prescribe social capital “treatments”.  We’re far more used to a doctor prescribing an antibiotic or an aspirin than recommending that a patient get actively involved in a group (on a topic he/she cares about).  And some social capital deficits are more easily treated than others — it’s hard to suddenly develop a confidant.  But doctors might note to patients that there are real health consequences of being socially isolated and being socially and civicly uninvolved: i.e., getting sick more often and recuperating more slowly.  If acquiring a confidant in the next year is not a doable goal, maybe deciding which of ones’ friends have the potential to be confidants and taking some steps to start to deepen these relationships might be doable over the next 6-12 months.   Patients might agree to certain steps they want to take and put them on a card in a sealed and addressed letter that gets sent to them in 4 months.  Nudges can also be used to help people keep promises (through ongoing social groups that hold their members accountable for their promises, checks that go to disliked groups if commitments are broken, etc.).

And as to why?  Doctors might point out that they would rather be prescribing social capital now than prescribing hypertension drugs five years down the road. 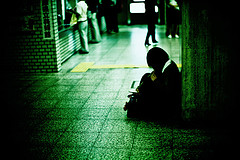 John Cacioppo (from Univ. of Chicago) has a new interesting trade book out (with William Patrick) called Loneliness: Human Nature and the Need for Social Connection.

His interview with the Boston Globe appeared in the Sunday Magazine over the weekend. Among his quotes/observations:

Cacioppo and Patrick highlight some interesting experiments among the lonely, among them:

The Boston Sunday Globe interview with Cacioppo can be read here.